The Ferndale Police Department is dedicated to the safety and protection of the citizens and businesses within our boundaries. We are committed to the task of keeping our courts and correctional system secure and our service is built upon integrity, respect, vision, and leadership.

It is our goal to always be open and transparent with the public. This newly created community dashboard will assist us in that continued effort. The data provided in the below charts have been obtained from a variety of internal software programs used by the Ferndale Police Department.

Calls for service are generally represented as calls to “911” for emergency assistance and may also include calls to non-emergency numbers. Each call for service that comes in is assigned a priority based on the type of crime or service that is requested.

Priority 3 through Priority 7:
Calls labeled 3 through 7 continue to decrease in their need for immediate response unless there are extenuating circumstances. Priority 3 calls for service include things such as neighbor troubles, animal complaints, civil matters, and weapons violations not covered by higher priority classifications.

Priority 8 and Priority 9:
Calls labeled priority 8 and 9 are less serious but important community calls that include things such as abandon autos and found property.

** Republic Parking is a separate entity. Their parking citations are not documented by the police department.**

A traffic warning is a verbal or written warning issued by a police officer in lieu of a traffic violation.

Arrest is defined as when a person is taken into the government’s custody and detained. Michigan Legislature provides a more detailed definition of an arrest. When an officer is unable to determine race and gender, the arrest race and gender categories are marked as UNKNOWN.

Law Enforcement terminolgy is not always user friendly. Here are a few definitions for abbreviations used in law enforcement.

The Ferndale Police Department Response to Resistance policy states that officers utilize the amount of force that is objectively reasonable considering the totality of circumstances that are confronted in order to affect an arrest/or accomplish the lawful performance of duty while protecting the public. Officers must perform their duties professionally, with respect for others, and in a manner that endeavors to protect and preserve life.

The Ferndale Police Department policy includes not only when force was used, but also when force was shown. A show of force is defined as a gesture with a lethal and/or less-lethal weapon directed at a person as a means to coerce or gain compliance. A use of force is defined as the attempt to establish control through physical means in the presence of resistance given the totality of the circumstances. The Ferndale Police Department conducts an internal review on all response to resistance that includes actions leading to an officer’s response, and what type of response was used. The following counts of subject’s actions and types of responses used do not represent individual incidents, but instead all actions and responses deployed for all incidents in which force was used.

The data has been categorized in 9 subject headings. Each category has a variety of training courses completed to assist our officers reduce risks, provide service and communicate more effectively with our community and all of it’s citizens. Please see the examples below of the training the Ferndale Police Department provides for it’s officers and the community. These training classes are not all encompassing but a small example of courses.

Providing crime stats that characterize conditions in our neighborhoods.

This may take a moment, please bear with us as the data populates...

Traffic safety in our City is an ongoing collaboration between our Police department and the Ferndale community to ensure those who travel within our city limits do so safely, whether by foot, bicycle, or vehicle.

While navigating the data you may question why so much of the data is “unknown”. The Ferndale Police Department responds to many “Hit and Run” traffic crashes and we are unable to provide driver details for those traffic crashes.

All citizen complaints, including those made anonymously, claiming misconduct by department personnel will be investigated fully. In order to retain the trust and confidence of the public, the people must know that the department will diligently investigate all complaints, and when there are findings of officer misconduct, then this department will take appropriate action. Any citizen who makes a complaint will be advised of the outcome, unless they choose not to be so informed

The Crime Trends Dashboard is used to view Ferndale crime data for specified periods of time. It is available to the general public and users are able to view and compare year-to-year statistics on all police incidents. The data provided is based on the number of incidents and does not reflect the number of citizen contacts.

Law enforcement report data can be an effective way to analyze where crime occurs and how crime has changed over a specific time frame. The dashboard contains data from January 2016 to present day.

The City of Ferndale has partnered with Common Ground, Oakland County’s leading crisis services agency. The partnership puts Common Ground in a position to help Ferndale first responders recognize opportunities for crisis management support and connect in-need individuals and families with available programs and services. Common Ground will follow up with referrals and provide a continuity of care - referring resources and follow-up care are provided only with individuals’ consent. Severe cases may be committed to the hospital on a voluntary or involuntary basis for continued mental health assistance. 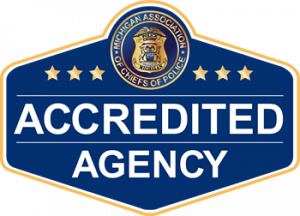 The Ferndale Police Department is an accredited agency through the Michigan Association of Chiefs of Police (MACP). Accreditation is awarded to a law enforcement agency upon demonstration of voluntary commitment to law enforcement excellence by living up to standards deemed essential to the protection of the life, health, safety, and the rights of the its citizens and exemplifying the best professional practices in the conduct of its responsibilities.